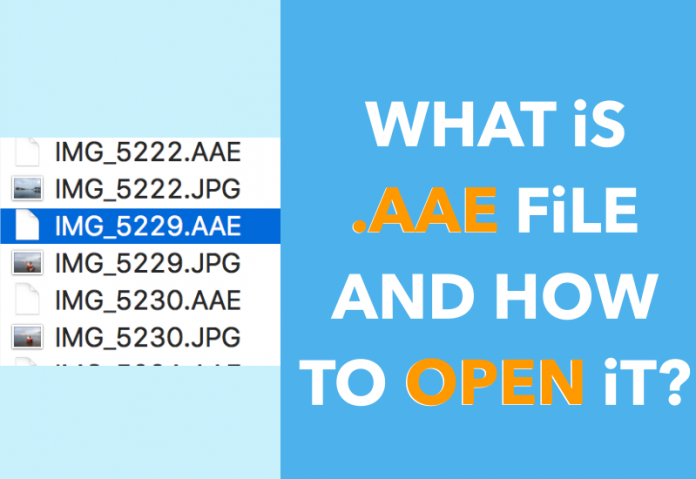 Most Apple users notice AAE files when they try to transfer edited images from one device to a device that runs on a different OS (operating system) if they have this problem and are confused about the AAE file and How to Open it .AAE files on Windows. You should read this article for more thorough information.

What is an AAE file?

AAE file record the edits that you have made on an image in the Apple Photos iOS. It is used to non-destructively transfer edits from iOS to macOS so that you can revert the image to its original form when you need it. These files are stored with the images whose edits they contain.

AAE files are generated by the iOS’s Photos Application and later version of the macOS. The purpose of these files is to save the edits that you made in your Photos so that your original image is not overwritten with the image.

In other words, whenever you edit an image on an iPhone or Mac, a corresponding AAR file consisting of the edits and is stored in the same location as the original image. AAE files won’t be visible in the gallery. Still, when you open an edited image, your iOS system will analyze the modifications that you made to it and apply them immediately.

You will notice an AAE file extension usually when transferring the photos, and you may think of these files as suspicious. Some people also notice this file extension while looking for some particular images or sorting type options in the finder. AAE files also exist on windows or the version of the Mac operating system. If you use Windows, these files can be quite frustrating as AAE files are always hidden, and you will not realize it as they are similar to the image file and display a preview icon. When you open the AAE file on windows, you will get a dialogue box that says that you cannot open this type of file. If you want to Open AAE files, you may not know their location. This type of file extension is in the same folder as the original photo and has the same name format, but the only difference is that instead, that file will have.AAE file extension instead of .JPG.

How to open AAE files?

To open AAE files on Mac, you should right-click on the AAE file and select open with > Others. After that, browse to the Applications folder and locate the TextEdit app. Your AAE files open in the TextEdit app, and you can browse all the data it contains. However, these data were saved in a structured format and had encoded information that cannot be decrypted.

On Apple devices, AAE files get analyzed automatically. You do not have to open them, although it is possible using the text editor program. The same procedure is for windows and other OSs. You can open AAE files on windows with any text editor such as notepad. You should keep in mind that you will not be able to apply the changes that are in the AAE file to a JPG on the operational systems.

How to open AAE files on Windows?

The first step you should do is display the AAE file; you can do it by opening each of the edited images individually by using the AAE files opener and saving them again without making any changes or alterations to the image. AAE files opener effectively creates several copies in the camera roll with the file extension alterations. You should get rid of the original picture, and import resaved images with modifications and editing.

Another efficient step you can do is to use an IOS application that is dedicated to transferring only AAE extension file types to transfer the pictures. It will help you to retain the alterations there are in the original photo. Before transferring, you should check that the program you will be using is compatible with your version.

You will have to use a suitable photo editor application on the Apple Device. You have to simply open the application and import all the essential images, followed by saving it again without any additional modifications.

Can I delete AAE files?

How to convert AAE files to jpg/png/mp4?

AAE files store the edits that you apply to a picture in an XML format. In other words, when you make edits to an image on an Apple device, rather than saving a new JPG file, the operating system will create an AAE extension to the original JPG. These files are exclusively for the newest version of iOS. Devices with an older version will not run these files.

For this reason, there will be no changes made if you open these files on an older iOS version. The edited photos will be open without any effects. You should convert the edits stored from the text format to the AAE files extension to the JPG file before transferring the photos. You can convert AAE files by following any of the given steps:

Winning Designs for a Corporate Office Interior Design in Singapore

The Importance of the Right Business Name